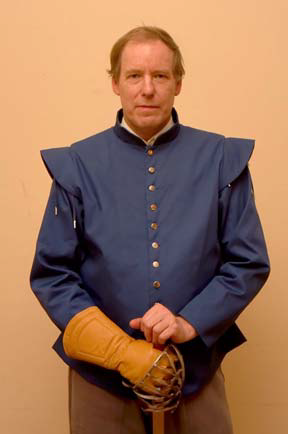 Peter Radvan came to Historical Fencing by way of Historical Re-enactment, with which he became fascinated over 30 years ago. Historical combat arts have always been central to his interest in re-enactment.

He was training a University Dark Age Society with Steve Hand in 1995, when Steve first started experimenting with George Silver. Very little was required to persuade him of the superiority of properly researched Historical Fencing over the old Make-It-Up-As-You-Go-Along School, even though it required abandoning 14 years of practice at the latter.

He was invited to assist in starting the Stoccata School of Defence with Steve Hand and Andy Brew in 1997, where he holds the post of Provost in Short Sword. Lacking the scholarly bent of Steve, Paul or Andy, he leaves research to others.

When not engaged in Historical Fencing, Peter practices his Art (and earns his living) on small furry animals, as a Veterinary Surgeon, and maintains his interest in Re-enactment as a member of an English Civil War group, a Dark Age group and an Ancients group.